For more Updates follow to our Telegram Channel Get now!

Gurnam Singh Chadhuni, who was the leader of the farmers' movement, entered the politics, formed a new party

Gurnam Singh Chaduni, a key figure during the farmers' protest against the three farm laws, clarified that he wouldn't contest the elections from Punjab... 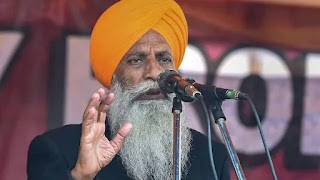 The leader of the farmers' movement and Haryana President of the Bharatiya Kisan Union, Gurnam Singh Chaduni has announced a political party. Chadhuni will start his political innings with Punjab elections. His party will contest all the seats in Punjab.

Gurnam Singh Chadhuni further said that most of the political parties are occupied by people with money. Capitalism is increasing continuously in the country, the big gap between rich and poor is increasing. He said that people with money are making policies for the poor. He said that our party will be above caste and religion and will be secular. Chadhuni said that it will be a part of all religions, all castes. In this party, people of rural, urban, labourers, farmers, roads, tracks will be included.